The Brands We Choose Define Us.

After months of anticipation and several groundbreaking announcements about its tremendous luxury travel brand expansion, Crystal has unveiled the ultra-chic design for the first vessel in the Crystal River Cruises fleet. Crystal Mozart will set sail on 13th July on its maiden voyage round-trip from Vienna, with spacious and stylishly outfitted guest suites, public lounges and dining venues.

Among the more exceptional touches on the re-imagined river ship will be a pop-up bar area on the top “Vista” deck, complete with a vanishing movie screen for al fresco evening show times. Also on the Vista deck will be a living rooftop garden area with teak b

ench seating areas for guests to enjoy nature as they sail along the Danube River. Two custom tender boats will be available onboard for more intimate exploration of the waterway’s picturesque locations, plus abundant outdoor space will ensure that travellers don’t miss any of the magnificent views.

The ship’s four main decks will offer numerous public areas for guests to enjoy onboard enrichment, fitness and wellness and world-class dining.  A newly installed elevator will be located mid-ship to take guests between the decks. Crystal Mozart will offer guests an array of elegant and casual dining options throughout the day. The Cove will be a main hub, housing a Yamaha AvantGrand Piano, manned by the

Crystal Mozart will also feature fully-equipped fitness, spa and salon facilities at the Crystal Life Spa, marking the first time ever the spa on a Crystal ship will be operated and staffed by Crystal’s own trained crew. An indoor pool will complement two treatment rooms and male and female sauna and steam rooms.

2016 fly/cruise prices for Crystal Mozart start from £2,450 per person for a 10-night cruise round trip from Vienna based on the 2nd and 12th December sailings.

Following the unveiling of the designs for Crystal Mozart, Crystal Cruises announced that it has signed an order for its eight new ships with the Lloyd Werft Group, a collection of four shipyards in Northern Germany.

Crystal will build six new luxury river yachts to be deployed on European rivers with deliveries from 2017 to 2019.  The two additional river yachts are the result of continued interest and demands from travel partners and guests, and join the four previously announced vessels – Crystal Debussy, Crystal Ravel, Crystal Mahler and Crystal Bach – planned for embarkation in June and August 2017. Crystal River Cruises makes its official debut this summer with launch of reimagined Crystal Mozart on July 13 in Vienna, Austria.

Additionally, the first purpose-built Polar Class luxury megayacht, Crystal Endeavor, which will be delivered in August 2018, will accommodate just 200 guests and take travellers to the Arctic and Antarctic Circles in addition to warm water cruising.  The final ship included in the agreement is the first of three Crystal Exclusive Class™ ships, which will weigh 117,000 gross tons and will accommodate 1,000 guests and residents. It is set for delivery in autumn 2019.  The Exclusive Class ships will also be equipped to sail the far reaches of the globe, including Polar and Arctic regions.

“The new Exclusive Class ships, yachts and river yachts planned for the coming years provide travellers with an exhilarating glimpse into the future of luxury travel of all kinds, from rugged expedition adventures to indulgently relaxing river cruises,” said Rodriguez. “In the agreement with Lloyd Werft for the building of these astounding new vessels, we are again reinforcing Crystal’s position as the leader in luxury travel and hospitality, as we continue to cater to virtually every wish of the discerning modern traveller.” 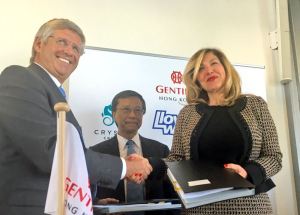 For more information and reservations, call Crystal River Cruises on 020 7399 7604 or visit www.crystalcruises.co.uk